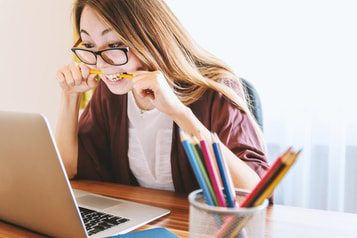 What is Test-Taking Coaching and how does it help?

People often ask Elizabeth what test-taking coaching with her is like. It's not your typical test coaching program at all. Those programs are wonderful but don't specifically look to maximize brainpower and teaching tools to reduce or eliminate test anxiety. Elizabeth's work only focuses on these long-neglected aspects of test-taking.

Elizabeth looks to maximize brainpower by checking that primary reflexes are integrated. She clears any stress that's been built up in the body, and removes any unconscious self-sabotage. This is useful to maximize test-taking ability, whether for the SAT, ACT, graduate school entry tests like the LSAT, GRE, GMAT, MCAT, or for professional certifications. It's also been a huge help for people who are frustrated with being unable to get the scores they know they're capable of on employer screening tests of cognitive ability.

Every client is unique, but here are some of examples of things that have generated negative self-talk which lasts for years until discovered, learned from, and released in session work:
Call Elizabeth or email her at elizabeth@rightbrainuniversity.com for a free 20 minute appointment to see if we're a good fit.
You can book and pay for an appointment using this link: https://rightbrainuniversity.as.me/


Among the results:
Testimonials:
​
See my Google reviews here:

​Kate P. "My son was struggling with the SAT Math 2 subject test despite being a good math student. He was regularly only able to complete 40 out of 60 questions on the practice tests, and of those he completed, he was getting almost half of them wrong.
I had him take 11 sessions at Right Brain University. Elizabeth put him into balance using acupressure points, then had him do Brain Training while working on math problems. Two months later, he took the SAT Math test. He was able to finish the test and came out feeling much more confident about how he'd done. We waited for results and were stunned when we learned he'd gotten an 800. He couldn’t have done it without Elizabeth. As a side benefit, his grades went up as well after working with her, and he got into college early decision.

Joan V. "Elizabeth is an incredible healing person. She helped me pass the California bar exam after I'd failed. She gave me exercises and other tools to help me work towards my goal of synthesizing and analyzing information I needed for the exam. She helped me develop that goal and all of our sessions supported the goal. She helped me to focus, de-stress, sleep soundly, and access rules that I had memorized over 6 months prior but since I was working full time, didn't have time to redo starting from scratch. She helped me with my test anxiety, lack of confidence, accessing my memory, and creative thinking and writing - the skills I needed to hone for the bar exam. Since then, I have continued to work with her to help me deal with anxiety and PTSD. I continue to work with her because she's an amazing healer, mentor, and all-around wonderful person. I can't recommend her highly enough."